With condolences to Dr. Swaiman’s family and all in his professional family, for the loss of a giant in the field. 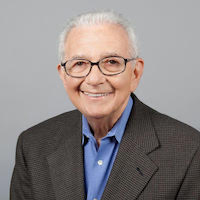 A note from Executive Director of the Child Neurology Foundation Amy Brin:

Dr. Kenneth Swaiman dedicated his life and career to bettering the lives of children with neurologic conditions and their families. His legacy in the pediatric neurology field is unprecedented and his impact is universally recognized.

He founded the Child Neurology Foundation in 1999, recognizing the need to support the outreach of child neurologists, and support families and children with neurologic disorders. As CNF’s first president, he was instrumental in laying the foundation for the work we continue to do decades later. Long after Dr. Swaiman had officially retired, he remained incredibly active in our community. I always appreciated his generosity of spirit and willingness to share his time, never turning down my calls or requests for lunch meetings to discuss CNF’s work supporting children and families. He was an engaged, visionary leader and founder, reflective in his counsel and consistent in his values – a bedrock of support and true inspiration to all those who surrounded him.

I cannot remember a CNF function where Dr. Swaiman and his wife of 35 years, pediatric neurologist Phyllis Sher, did not attend and act as gracious ambassadors of our mission to all who would listen. A beautiful couple, the two of them epitomize deep commitment to the child neurology community.

Our story with Dr. Swaiman is just a small piece of the larger mosaic of his life. During his career, he belonged to 20 professional organizations, served on 15 editorial boards of major scientific journals, and trained over 80 child neurologists during his academic tenure. He initiated the founding of the Child Neurology Society and the Professors of Child Neurology, and the publication of what is regarded as the primary textbook in the field, Pediatric Neurology: Principles and Practice. He also began the journal, Pediatric Neurology, one of the major pediatric neurological journals, and served as its editor from 1984-2012. Dr. Swaiman was an unstoppable force and has forever changed the trajectory of the child neurology field.

He is survived by his wife Phyllis Sher, children, grandchildren and great-grandson. Our deepest condolences go to Dr. Swaiman’s family and all in his professional circles. He will be missed.