Outside of Chicago a group of special needs athletes were participating in the 2017 Champions Special Needs Skating Competition. For the participants, it’s not just about the competition. It’s about sharing their love for skating with others.

The Competition took place on Jan 7 at the Franklin Park Ice Arena. Over 100 athletes from as far as Wisconsin, competed in sled hockey, speed skating, figure skating and hockey events.

“This competition is a special opportunity for these kids,” skate school director Anne Raucci said. “It’s important for the Franklin Park Ice Arena to host this.”

Chris Stanton, who’s daughter Abbey was one of the participants said, “The thing that Abby likes the most is being around all of her friends, it’s an activity every week [in which] they can be together, and they enjoy skating.”

“Competing doesn’t scare me,” Abbey said. “I get to see my friends.” 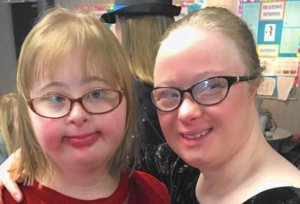 Mark Carlson of Lemont said his daughter, 14-year-old Madeline Carlson, likes the attention of performing in front of a crowd. Three years ago she couldn’t stand on the ice, and now she can do pirouettes and turns.

“She’s usually very introverted, so competing is a change for her,” he said. “What’s easy for us is harder for them — sometimes simple tasks we take for granted. This competition is a chance for them to have their moment in the sun.”