Home
/
News
/
The Value of Family Support When Living with Dravet Syndrome
Posted on November 11, 2022November 30, 2022
by Lexie Digby
Posted in News

Charlotte Martenz, 17 years old, experienced her first seizure at 4 months old and was diagnosed with Dravet syndrome in 2006 when she was nearly 2. At the time, few doctors had heard of the condition, let alone knew how to treat it.

Dravet syndrome is a rare form of epilepsy characterized by the onset of frequent, temperature-sensitive seizures in the first year of life. It is associated with a range of early developmental disadvantages, such as speech and language delays and challenges with balance and walking. Formerly known as severe myoclonic epilepsy of infancy (SMEI), Dravet syndrome is caused by a genetic mutation, SCN1A, that affects the function of brain cells in most children. 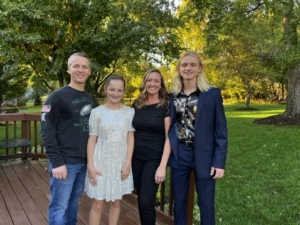 Research has progressed significantly since 2006, and children with Dravet syndrome are now diagnosed earlier. Still, the condition remains extremely difficult to control with medication, and some can even worsen it.

“It’s nearly always a prolonged seizure that has to be medically stopped in the emergency room,” Charlotte’s mom, Dawn, explained. “That’s the first indication that it’s Dravet syndrome and not one caused by a childhood fever.”

Although Charlotte learned typical toddler skills, her constant seizures caused learning difficulties, and she lost nearly all her speaking ability by age 5. Finding an effective seizure medication was “like throwing darts at a dart board,” Dawn recalled.

One day, Charlotte started having non-stop, potentially life-threatening seizures, known as status epilepticus and had to be transported to the ER by ambulance. Desperate for solutions, Dawn asked Charlotte’s neurologist at Washington D.C.’s Children’s National Hospital to start her daughter on the ketogenic diet. Although not fully understood how, the high-fat, low-carbohydrate diet helps control seizures in some people with epilepsy. Often used in children who do not respond to medications, it must be physician-prescribed and monitored by a dietician. To start the diet, Charlotte first had to fast for two days in the hospital.

“Her seizures stopped within 72 hours, for the first time in years,” Dawn said. “Soon after, Charlotte’s condition improved significantly as her seizures became much less frequent. Charlotte still has seizures and can’t be left alone because of her learning disabilities, but she can lead a very fulfilling life now,” said Dawn.

Check our our Epilepsy Education Hub for tools and resources to help your family, including our Healthy Epilepsy Management Video Series.

Dawn has become such a supporter of the diet that she wrote two ketogenic cookbooks for medical professionals. She also volunteers from home with the Charlie Foundation for Ketogenic Therapies, counseling parents and families.

Family support makes a significant difference in Charlotte’s life. In addition to her mother, father, and 15- year-old brother, J.T., her grandparents, aunt, and uncle live nearby. When she was younger, Charlotte’s seizures had many triggers, including television screens and the sun’s reflection in swimming pool water (known as photosensitive seizures). As a solution, her uncle developed software that creates a slideshow of movies and television shows, enabling Charlotte and others to watch them without experiencing seizures. It recently won second place in the Epilepsy Foundation’s Shark Tank competition.

Recently, Dawn switched Charlotte from a rectal seizure rescue medication to a nasal seizure rescue spray that treats seizure clusters. The rectal prescription required at least two people to stay with Charlotte at all times – one to administer it and the other to call 911. In the past, Dawn never felt comfortable leaving Charlotte with J.T. and putting either of them in the position of him having to administer it to her. Now, with the new nasal rescue medication, she feels better about doing so and looks forward to more date nights with her husband, Steven.

“Before, it was always Charlotte’s grandparents who stayed with her, but they’re in their 70s now, and it’s harder for them physically,” Dawn said. “Now, my son is one of the most capable people to leave her with. We have options now, whereas before, we didn’t.”