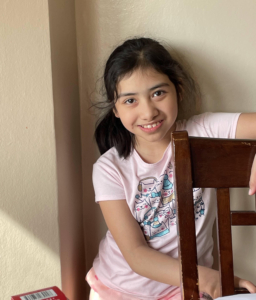 Grace Rodriguez is a 9-year-old with Dravet Syndrome.

Gloria Rodriguez has spent nearly 10 years learning how to be the best advocate possible for her daughter Grace, a 9-year-old with Dravet Syndrome.

Grace had her first seizure when she was only 4 months old and still has them to this day. But thanks to the family’s openness to participating in clinical trials, they have been able to control Grace’s seizures, and in the process, help her live life more fully.

“It’s been a very long nine years,” said Gloria. “I feel like I’ve aged 20 years in this time. Becoming a mother to Grace has not at all been what I expected; nobody expects to live a life like this. But it happened, and it’s been a roller coaster every day. It’s been eye-opening and jaw-dropping, but I feel very grateful to be where we are right now.”

After Grace started having seizures so early in her life, Gloria and her family became regulars at the pediatrician’s office and the ER. Before Grace turned 1, she had been intubated 18 times and hospitalized almost weekly. Like any parent watching their child go through this, they just wanted to know what was happening.

“A 48-hour EEG showed that Grace was having 400+ seizures a day,” Gloria said. “Despite the obvious struggles our family was facing, we couldn’t find a doctor who would help us. Most of the responses we got were ‘these are flukes, they’ll stop eventually, take this medicine to help.’”

Helpful Resources: Are you preparing to meet a new neurologist or learning how to manage your child’s seizures? Download our Child Neurologist New Visit Toolkit or our Seizure Action Plan Guide.

Finally, they saw a neurologist who was committed to helping them find an answer. She advocated for genetic testing, even when insurance refused to pay, insisting this was urgent.

It took three months for the results to come back, and during that time, Gloria spent endless hours researching epilepsy and all the different diagnoses that Grace might receive.

“I remember reading about Dravet,” she said, “thinking, ‘This can’t be this one. It sounds so awful, this can’t be what Grace has.’”

When the results came back showing a genetic mutation associated with Dravet, Gloria said she instantly started crying, because she already knew what it meant.

At this point, the family began their search for medication to help control Grace’s seizures. By the time Grace was 18 months, she had already failed three medications. This search prompted Gloria and her husband to get involved with The Texas Compassionate Use Act (Senate Bill 339), which was enacted by the Texas Legislature in 2015 (84th Legislative Session) to help pass a bill that would allow children like Grace to have access to cannabidiol medications.

During this time, Gloria also found out about an FDA approval trial that was happening in Houston for a cannabidiol medication. They had to wait until she was 2 years old and she was the youngest patient enrolled in the study.

“It was a double-blind trial, so we didn’t know if she was getting the medication or the placebo, and it was made very clear to us that we could never know,” she said. “But 18 hours after she received her first dose, her seizures were so minimized, I had no doubt in my mind that she was receiving this medication, and that it was going to change her life.”

Every day, no matter what Gloria and her husband tried, Grace always had a seizure when her dad came home from work. It was a sign of her love because it was excitement that caused her to seize, but it was a heartbreaking moment every day when Grace’s dad couldn’t come home without causing a seizure. 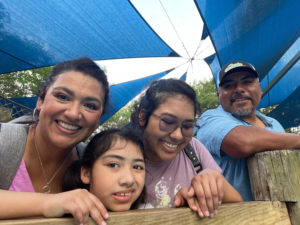 “The first time my husband came home after the first dose in the trial, Grace didn’t have a seizure,” Gloria said. “My husband broke down in tears, I couldn’t believe it. I knew that Grace was getting the real thing.”

This marked the beginning of a whole new chapter for Gloria, Grace, and the rest of their family. They could go to the park, play on the slides, feed the ducks, go to the beach and look at the waves … all simple things that would have caused too much excitement for Grace before.

This medication helped Grace for most of her life, but as she grows into a pre-teen and teenager, Gloria says they are once again having to adjust her medications. Additionally, Grace does exhibit developmental delays that have made finding adequate schooling a challenge. And as many patients with Dravet do, Grace has comorbidities to navigate, such as autism. Add the delay of the pandemic to the list, and Gloria says that sometimes it feels like life will never not be overwhelming.

“Dealing with the hard stuff is all part of the journey,” Gloria said. “And I appreciate that the Child Neurology Foundation is willing to talk about the hard things. I really appreciate the bi-weekly email; it’s full of a lot of great information.”

As Gloria continues on the journey of being a parent to a child with a neurologic condition, she wants people to know how amazing children like Grace are. 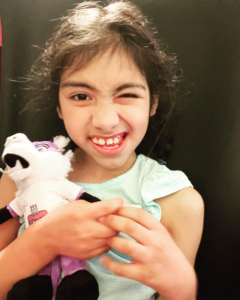 “They might not be able to do everything, but they have their own special abilities. It’s amazing to see the world through their eyes.”

“They can teach us so much,” she said. “They might not be able to do everything, but they have their own special abilities. It’s amazing to see the world through their eyes. And I just want everyone to realize that these kids deserve a chance at a happy life just like all other children. This job of being a parent is a hard one, but I truly believe this is my calling.”