Lucas is one of the children who received a $1,000 Rise Family Grant from CNF. Here is a message from his family. 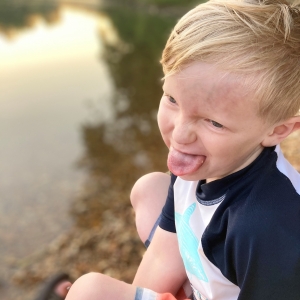 My son’s name is Lucas.  He is 7 years old and in the second grade.

When Luke was born, the doctor took him away quickly.  I had a C-Section and was recovering from an adverse reaction.  After a while, I was moved to my room, and I (along with my family) impatiently waited to see him for the first time.  The doctor came in first.  He explained to me that Lucas was born with some “Very interesting characteristics”.

Luke was born with what the Doctors thought was a Port Wine Stain- that covered a large portion of his body.   At birth he had a dark reddish-purple birthmark (what was believed to be a port wine stain) between his eyes, under his nose, and on his bottom lip.  It has since faded to a lighter red.  He also had a large portion of his forehead that would change colors to a darker red when he got upset, it has also faded to a much lighter red.  He does still change colors sometimes.  When he was only a few hours old it was also discovered that his hands, legs, and feet were a dark purple- bluish color.  At first it was thought that this was because he had low blood sugar but later we learned that actually the discoloration was due to acrocyanosis (which is an over exaggeration to hot and cold) it’s harmless.  Although Luke does have hypoglycemia or low blood sugar.   Luke still change colors on his legs and arms, sometimes they are purple, sometimes more of a blue.  *What we now know, after Genetic testing, is that all of his “discolorations” are Capillary Malformations and an abnormal amount of blood vessels. 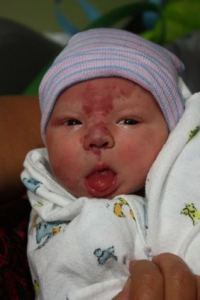 Bonus #2:
The right side of Luke’s body is larger than his left side.   His right ear is bigger than his left, his right cheek bigger than the left, his arm, hand, leg, foot and even right booty cheek are all slightly larger on the right, than the left side.  He has what is known as Complex or Total Hemihypertrophy (hemi).  This means that it involves only one side of the body from the head down.  Luke’s right leg is longer than his left leg as well, he has to have a shoe lift for the left side to make his legs even.

Bonus #3:
Luke has webbed toes!  He also had two webbed fingers on his larger right hand.   Webbed toes (or fingers) is the common name for syndactyly affecting the feet (or hands).  It is characterized by the fusion of two or more digits. This is normal in many birds, such as ducks;  amphibians, such as frogs; and mammals, such as kangaroos.  In humans it is considered unusual, occurring in approximately one in 2,000 to 2,500 live births.  There are various levels of webbing, from partial to complete.  Most commonly the second and third toes are webbed or joined by skin and flexible tissue.  This can reach either part way up or nearly all the way up the toe.  At nine months old, after strong recommendation from the doctors, Luke had his fingers surgically separated.

Shortly after Luke was born and there were discussions about his medical conditions, Luke’s sister, Alivia, became a bit concerned and began asking a lot of questions.  Most of the questions were “Why?”  Why does my brother have this or that?  I simply explained that each of us are unique… God made each of us special, each of us different.  To make it more understandable, to an 8 year old, these differences became known as “bonuses”.  Lots of people have bonuses!   That’s what makes us so special in God’s eyes.  The fun thing is that Alivia will see someone with something different about them and since then has responded, “It’s just their bonus!

The doctor explained to us that each of these “bonuses” were not necessarily concerning if they had occurred on their own, separate from any other health concerns, however, the fact that he had so many different concerns at once meant that he likely had some sort of “genetic syndrome”   They recommended genetic testing. 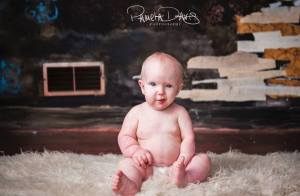 At 3 months old he was diagnosed via genetic testing at St. Louis Children’s Hospital, with Megalencephaly- Capillary Malformation (or MCAP / M-CM).   His syndrome is very rare, only affecting about 350 (known) people currently, worldwide.  MCAP / M-CM is a multiple malformation syndrome causing body and head overgrowth and abnormalities of the skin, vascular system, brain and limbs.   A key sign of M-CM is progressive brain overgrowth, resulting in macrocephaly (larger than normal head). Complications from brain overgrowth can include hydrocephalus and/ or brain stem compression. Additionally, a variety of brain abnormalities are sometimes seen in M-CM patients. Other common characteristics of M-CM include body asymmetry (hemihypertrophy or hemihyperplasia), vascular birthmarks that cover a significant portion of the body at birth, doughy skin, hypermobile joints, finger and/or toe polydactyly (extra digits) or syndactyly (fused digits), wide feet, and distinctive facial features.  Many children will have a red birthmark on the upper lip at birth. The vascular birthmarks in most individuals will fade over time, distinguishing them from “port-wine stain” birthmarks.

Most affected individuals will have some degree of developmental delay and/or disability.  Individuals can be affected in dramatically different degrees.  Physical and cognitive disability runs the gamut from very mild to severe.

Lucas is doing great, he’s really a great kid.  He rocks his appointments like a champ.  He has a very good disposition about life in general, he’s friendly and outgoing, he has a smile that lights up a room, he loves people, and he’s also a typical rowdy boy.   Our biggest challenge, though it may sound silly, is finding shoes to fit his extra wide, puffy feet.  It’s actually been very stressful and frustrating.  Extra wide shoes are already limited in brand and design for young boys, making them quite expensive and often only available online- not in stores.   I’ve purchased shoes so many times, only to receive them in the mail, try them on, and to our disappointment- they aren’t wide enough or tall enough for the top of his foot which results in me having to ship them back, receive a refund and attempt to order different shoes.   Shoes in and of themselves get to be very costly- buying, returning, waiting for refunds, and buying again over and over.   Luke happened to have a growth spurt about the time COVID shut down our school.  I am the Art teacher at our very small, rural school district.  March through the summertime, we just stayed home and Luke ran around barefoot.  When things began opening back up, Luke didn’t have a pair of shoes that fit, so I began the search again.  When we received this grant money- I was able to pay off some bills, and I was also able to go online and purchase all at once several different pairs of shoes in several different sizes all at once, without worrying about being able to afford it all at once.  The shoes all came in, we found a pair that worked for him, shipped the others back, and then ordered that same pair in the next size up.   In addition, I was able to purchase Luke’s school supplies, and new clothing for the school year- including fall and winter clothes.   As a school teacher in a low income area, my salary is below the average for southeast Missouri, and quite a bit below the average pay for teachers across the United States in general.   My husband, Luke’s dad, is a general contractor- self employed.  We also have a 15 year old daughter, Alivia.   When I opened the mail, upon receiving your letter, I squealed with excitement- my eyes filled with happy tears.    I am sure there are families who are much more needy and possibly deserving of this grant money; my family and I are truly grateful that we were chosen.  It just brought about a sense of relief and true thankfulness- a light so to speak- during such uncertain, and dark times that we’ve been facing.  Thank you so much for what you do to help others.  We feel truly blessed.”  – Stephanie