During our Child Neurology Awareness Day #NeuroHero campaign in October, we had several families reach out to us to share their #NeuroHero stories. One of them was Melissa Kroll, whose toddler Hudson was diagnosed with TSC after a head injury. In her own words, Melissa shares the story of their diagnostic, treatment, and surgical journey.

“If you are new to this community, take it one day at a time, not everything you hear or read online will happen to you or your child – there is hope out there. For us, we were so grateful that surgery was an option.” 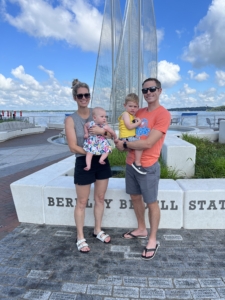 The Kroll family with Hudson and his sister Harper.

Hudson’s story began when he was 20 months old. We had just welcomed his new little sister, Harper, into our family when two weeks later, Hudson hit his head on the coffee table. We took him to the emergency room because his head swelled, and the injury point had a boggy center where his head hit the table. The doctor ordered a STAT head CT because of the boggy center/dent. The results came back, and they told us they would admit him and keep him overnight with neuro checks because the CT showed a subdural hematoma and subdural bleed.

The doctor returned and told us the CT scan also showed a large mass in his brain, so she consulted neurosurgery. They told us we would need an MRI the next day to rule out tumor versus calcification. They ended up doing a spine and brain MRI with sedation. The results came back, and our neurosurgeon said Hudson has a rare genetic disease: tuberous sclerosis complex or TSC. He also told us the MRI showed that he has Chiari 1. TSC causes tubers (benign tumors) to grow in vital organs. It is not curable. It can cause seizures, developmental delay, kidney, heart, lung, eye, and skin problems. Hudson has a tuber in his brain.

On March 20, Hudson had his first seizure (that we know of). We started seizure meds right away after he continued to have them. They were under control, but the side effects of the medication were unbearable for him to go through and as parents hard to watch. We lowered the dose, but the seizures picked back up. This time we caught them on an EEG coming from his tuber in his left frontal cortex. We started a different medication on April 25. It helped initially but then stopped being effective.

After the seizures continued, we started a third medication,. This medication helped initially, like all the rest, but stopped being effective. The plan after this (after much discussion, including presenting Hudson’s case at the TSC conference in Dallas) was to do an open resection craniotomy surgery to remove the tuber in Hudson’s brain causing his seizures. We met with Dr. Meysam Kebreiei, one of our #NeuroHeros throughout this journey, and he eased our fears, especially when he said there is a high-percent chance Hudson could be seizure-free.

We started another medication to help get his seizures under control while we waited for surgery, which was scheduled for Sept. 16. The surgery went great. The day after surgery, Hudson was pointing at me and saying, “mama.” This was a word he used to say but then had stopped saying when his brain was active with seizures.

Do you know someone who has seizures? Do they have a seizure action plan? Learn what they are, why they’re important, and how to build one.

Hudson is now seizure free and seeing the world differently. It’s like he is coming out of this fog he was in when his brain was constantly trying to go into a seizure or recover from it, making learning and development impossible.

He’s now saying new words, playing with his little sister, and playing with his toys differently than before. Our family is enjoying all of his new discoveries and interests. He has physical therapy, occupational therapy, and speech therapy three days a week to catch up on his development.

Hudson has gone through more in the past year than most people do in a lifetime. My goal as a parent was to be the best advocate for him in such a critical time of his life to get him back on track to being a normal 2-year-old kid.

Everyone’s journey is different, but one thing I did during our journey was join a few other Facebook support groups to help me navigate things and gain as much knowledge as I could. I wanted to hear everyone’s story, so I could pick through them and see which parts would make up my son’s story. I’m so glad I did. I still get advice and am giving others advice which feels good.

Do you find yourself needing support on your journey? Our Family Support Program can connect you to resources, education, local support services and aid organizations for your unique situation. Learn more here.